Take a female clown, named Pepa Plana, and then put her to await the return of a husband who has just left the conjugal home to go to war. Give to her, by way of distraction, a sewing machine and enough thread so that her needlework helps her to forget her woes and makes us to forget ours at the same time. Well, the result is a playful and humorous remake of the Trojan War, with their ships, their citadels, their heroic warriors and, of course, the far-famed horse which brought victory to Ulysses troops. 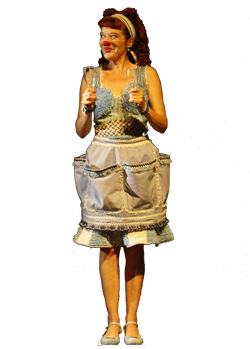 There is Pepa Plana
Here there is Pepa Plana, and although we can’t see her yet, the female clown of purple heart and big shoes starts to win us over, even before the light goes on, with a sigle sigh. And yes, it is impossible not to be won round by her, not to be absolutely devoted to her enormous communicative power, we are faced with her brilliant ability to measure the timing of her gags, and her capacity tolisten the audience’s heartbeat so to make the show breath at the same rhythm.Marvellous.
Joaquín Melguizo, Heraldo de Aragón, 5 December 2009.

Chameleon Pepa
If the All Blacks coach could see Pepa Plana in action he would sign her up ipso facto. Known for her ability to trasnform into different characters by simply changing the gesture, the actress takes this chameleonic abiity to an extrem with Penèlope. Pepa is the small and coquette clown, but she is also Penelope that rebels against the destiny assigned to her by Homer.
Gemma Tramullas, El Periódico, 30 April 2010

Pepa Plana, cute and naughty
In this show there are a lot of brilliant ideas, original and apparently simple, but there is also a lot of work and, above all, there is Pepa Plana’s talent, a tender and playful clown that offers us the funniest version of Ulysses travels ever made, as well as of Penelope’s wait. A great Pepa Plana.
Dani Chicano, El Punt, 13 April 2010

Pepa Plana, the great clown
In addition to have been a pioneer in Spain, we must now recognise Pepa Plana’s efficient character emphaty, as well as her artistic courage shown with her solo challenges De Pe a Pa, Giulietta, Hatzàrdia, and now this intelligent review of the the Homeric epic. In Penèlope the clown plays with space and time, and with the symbolism and counter-symbolism of the contents. Plana has a magnificient tract to cover and her versatile character only predicts the very best.
Jordi Jané, Avui, 30 April 2010

Pepa, the great heroine
If Penelope, the wife of Ulysses, has always been overshadowed by the fame of her husband, in Penèlope she is the great heroine, the woman who moves – literally – the threads of the Trojan War, and the lucid strategist that suggests the construction of a wooden horse to bring down the legendary city. Her skilful play with the audience, or scenes such as the battle behind the walls of the besieged city certifies Plana’s charisma and the undeniable interest of the offer. Pepa Plana indulges in the detail.
Came Tierz, Time Out, 06 May 2010

Intelligent humor
Penèlope is a marvel of delicate and sarcastic mime, of complicity with the audience and of introspection of the artist with her creative work, of realism –the physical life of objects and utensils – and of fantasy – the few and very effective conjuring tricks. With her clown red nose, Pepa Plana reclaims an intelligent sense of humour in which every smile is accompanied by a reflection.
Antonio J. Navarro, Guía del Ocio, 07 May 2010