The rebel, Albert Camus tells us, is a man who says ‘No’. The clown, on the other hand, is a bewildered man who spends his time disturbing the established order by firing impertinent questions at the world – impertinent, of course, and yet insidiously pertinent at the same time.
In this show, Pepa Plana is a rhapsodic, perplexed, coquettish and rather low-down clown offering to take us on a trip through the realms of universal poetry, helping to heighten the atmospheric turbulence with a handful of questions: What’s the sex life of Chinese people like? Is his lordship the poet a criminal holding no liability for the tribulations of those he begets? I like poetry a lot, says Pepa just before she dives into the first poem armed to the teeth with questions.Poet, watch out! Watch out!!! 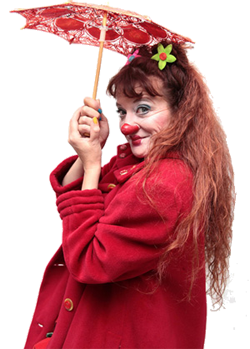 Pepa Plana
Joan Maragall surely could never have imagined that one of his best-know poems – La Vaca cega (The blind cow) – would one day prompt a collective feast of belly laughter.
Belen Ginart. El País, 14 June 1998.

Essentially clown
Pepa Plana constructs a character from his personal character, no hairpieces, that catches the viewer from the beginning and was jailed without possible escape as the action progresses. It does essentially clown.
Jordi Jané. AVUI, 3 July 1998.

A Clown
This is a show that’s full of humour and irony, with hits aplenty. Gestures and special gazes lurk in that big red nose she always has on; and the audience laughs away unrestrainedly. Along with her gags, this clown also conveys a large measure of humanity.
Gonzalo Pérez de Olaguer. El Periódico, 22 December 1998.

Entertaining clowns
A supreme actress, versatile and capable of prompting a gale of raw, unforced laughter at a stroke. Guffaws at recognising the absurdity she portrays and parodies.
Javier García Sanchez. El Mundo, 7 December 1998.

Pepa Plana displays her great gifts as a clown
Between one guffaw and the next, she strikes home. She recites poetry her way, and explains her experiences to an attentive, amused audience that doesn’t know what to expect next from a clown such as Pepa Plana, who displayed her great talent yesterday.
Josep María Marsal. Diari de Tarragona, 12 November 1999.