From within the fascinating catalogue of human creatures, the clown is possibly the only one that does not know discouragement. See the clown´s serious attitude and wonderful perseverance when intensively attempting to find solutions to the problems that may arise. Watch how the clown´s neurones produce brilliant solutions.

The problem though, is that every outcome is followed by a brand new problem, which will need, once more, different solutions that, in turn, will provoke new difficulties.

The clown´s life may be hard, true. But luckily fate often intervenes with its repertoire of happy accidents, and so the clown ends up unexpectedly finding the unforeseen. 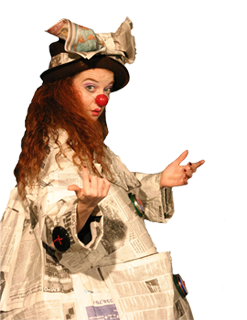 Something to enjoy
Pepa Plana put on her clown’s nose, went out on stage, and shone. She gave us an impeccable show.
“Hatzàrdia” is well thought out, well arranged for the stage, well directed and very well performed. The show is full of fine moments – comic moments and touching ones too.
Joaquín Melguizo, Heraldo de Aragón, 13 October 2005.

Along
Pepa Plana is out on her own, making her way out onto the stage like a cleaning lady and then, through her ability to transform the most commonplace things into stage toys, succeeding in turning out a very intense show, Hatzardia, with excellent staging and her constantly dazzling communicative power as a clown exhibiting wide-ranging abilities and captivating sensitivity.
Artez 100, August 2005

The endearing Pepa Plana
The clown Pepa Plana, in “Hatzàrdia”, has created a range of endearingly captivating characters. She delves into the stock figures of the feminine imaginary world, from the cleaning lady to the stock mother, all just right for turning into the subject-matter of her gags, which are often imbued with a finely-spun melancholic, poetic tone. Pepa Plana has here a good show with little touches of magic, and evincing great attention to detail, such as the costumes, no doubt as a reward for constancy and plain honest hard work – efforts which bear fruit in these stories.
Pep Martorell – El Punt 13 september 2004.

Pepa Plana, a great clown
The Clown is perhaps the most accomplished personification of human existence. Pepa Plana has turned out a brilliant demonstration of this – an analysis of life through a direct language that is never recondite.
Joan Sala Vila, El Vallès, 8 april 2005.

A clown along more classic lines
Plana exhibits spectacular control over her body on stage – to the extent of looking like she’s made of rubber – and carries on building up a clown who is touching, lyrical, full of herself (and very much so) and sexy, all backed up by incredible costume work. A clown that plays with everyone in the audience and wins them over unconditionally.
R. Porta, El Periòdic d’Andorra, 5 march 2006.

Like a glove
What Pepa Plana does on stage looks very simple, but it is in fact very complicated: it’s difficult to go out on stage and win over the audience in two minutes flat, without any trickery or any text to catch the viewer’s attention. She avails herself of the finest traditions of the clown’s art, as well as her considerable accomplishment as an actress, thanks to which she is skilled at sensing the mood of the audience, at pacing each effect, and at making the most improbable things seem believable. There are art theoreticians who tell us that creativity is simply an exercise in affinities, and the fact is that Pepa Plana wears the stage like a glove.
Miquel Vigo, Diari d’Andorra, 5 march 2006.