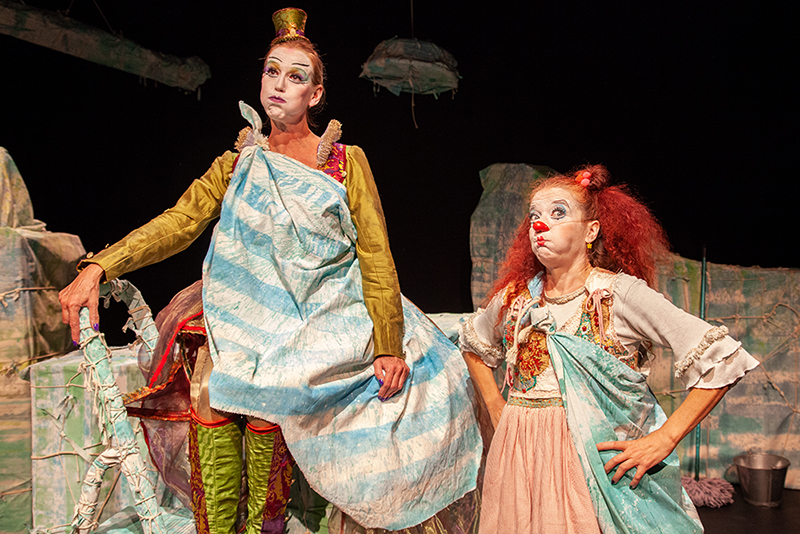 Veus que no veus
Pepa Plana is magnificent and extraordinary. The energy, the wealth of her gestures, the infinite resources she demonstrates, the rhythm on the stage, the movement that accompanies every word, the contrast of moods and, ultimately, the communication skills of Pepa Plana on the stage are so powerful that make this show one of the best in her career, since it brings together her theatrical talents with a terrain that she quite never entered before: the circus clown.
And she presents a replica as a great novelty, the actress Noël Olivé, a real discovery that plays the role of Whiteface and a person of order in the face of the Auguste woman’s raucousness. The female version of two of the most classic circus numbers is one of the great new features of the show and a tribute to all those grandmothers who could never be clowns. The show talks about the inequality suffered by women from a feminist perspective. "If you have seen us it's because we are here", say Plana and Olivé at the end of the show. And we hope that they’ll keep being here and that we can continue to see them in many venues across Catalonia, because this show, for what we have seen, is an indispensable play that we hope it will find its place. It deserves it.
Marcel Barrera, Recomana 19/10/18.

Veus que no veus
The metaphors are over, and Pepa Plana presents herself without filters. Now, accompanied by Noël Olivé, who assumes the role of the White Clown: tall, stuffy and authoritative, but pathetically defeated by the spontaneity and empathy of an Auguste such as Pepa Plana that tells it like a jester to his king. And who manages to entertain the people at the same time. These two female clowns make a show as tender as a mattress, but with a point of healthy cynicism. They reclaim women on the stage, and in the management positions of theatres. And they do so with classic clown gags, making sure that they, amusingly, don’t step on Tortell Poltrona’s adaptations and relying on Monti’s motto: “we want to do our work and to be taken seriously at it”.
Jordi Bordes, Recomana 20/10/18